Climbing a giant hill in 90F heat: sounds like a brilliant idea…

We had a day’s reprieve from house-hunting last Saturday so we decided to go to the Griffith Observatory.

We actually tried to go there a few weeks ago but were confounded by the lack of parking.

Griffith Park is only a few miles from our hotel in Burbank so we saw it as an easy target for our first excursions as tourists. We decided to skip the carpark and leave the car at the bottom of the hill. We were assured (by apparently much fitter friends) that it was a mere stroll to the Observatory from there.

Unfortunately the weather last weekend was Hot. By 10am it was 90F (32C). But no matter; we were going to do this.

We drove to the appropriate spot near The Trails café (apparently a good place for star-spotting) and parked on the road.

Once out of the car we found there was a surprising lack of signage, and several trails to choose from. After some time walking up and down and consulting Google maps we eventually decided on a path.

I had erroneously assumed the path would be shady, since the hill is covered with trees. But no – I was quite open to the blazing sun, and pretty steep. After about 15 minutes we were breathing hard.

Luckily at our first shade/rest break we turned around and saw this!

As we got closer to the top we started getting better views of the city below and the Observatory above. 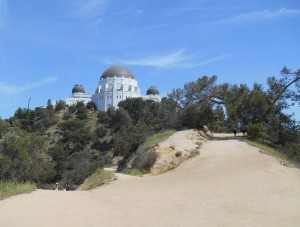 By the time we staggered onto the plaza where everyone else was just getting out of their air-conditioned cars, probably 30 minutes later, we were quite hot.

We immediately found some shade and after a couple of minutes climbed the stairs to “The telescope”. The Telescope turned out to be The Zeiss 12’ Refractor which is apparently used on public observing nights.

The Observatory is free to visit so we headed into the relative cool of the exhibit space.

In the first hall there were, among other things, Galileo’s first telescope (the original? It wasn’t clear), a good display showing refracting and reflecting telescopes, and a steerable model of a (the?) telescope and dome.

We then headed down a long corridor decorated with ‘astronomical jewellery’ showing the timeline of the universe. It only mentioned the bits relevant to human existence though, so there were 5 billion years of blank wall space. This seemed strange, or good, depending on what you were trying to communicate I suppose.

We investigated the Gunther Depths of Space exhibit (big models of planets!) then retired to the surprisingly empty café to recharge. Then we faced the long hike back down the hill to the baking hot car.