I currently lead the communications team for a project to build a giant optical telescope.

My background is in physics and astronomy and I have experience in social media, website management, blogging, writing for the public, creating resources for high school teachers, event planning, and public speaking.

Below are descriptions and clips of my other science communication activities since 2007.

If you have any questions please email me at amanda.kocz[at]gmail.com or leave a comment below.

Between mid-2012 and March 2014 I spent many hours in the Museum of Science‘s Discovery Center (DC), a space for children age 0-8 and their grown ups.  I volunteered for around 150 hours and then became an intern in October 2013.  My time in the DC was spent on Interpretation – interacting with children and adults to allow them to get the most out of the exhibit.  I could be showing a toddler how magnets go together (or not), helping a four year old with their scissor skills, or spending 20 minutes with an eight year old investigating the properties of the DC’s rock and fossil collection.  On weekends was part of the auxiliary team which sets up a lab for the day, handling around 20 people at any one time, to investigate common materials found in the kitchen or create and experiment with slime.

I interned with this group between October 2013 and March 2014.  I worked with the team to bring together a series of evening programs for adults featuring scientists and practioners presenting lectures, panel discussion and film screenings.  Behind the scenes we worked to prepare the lecture hall, look after the speakers and any sponsors, write the program information sheet, man the registration desk, and roam the theater at the end of the lecture taking questions.

AAL is a not-for-profit organization dedicated to providing Australian astronomers with the best possible research infrastructure. I was involved in a myriad of communications activities at AAL between 2010 and 2012, including putting together the Annual Report, writing minutes of committee meetings and even writing a grant proposal.  I also wrote the text for factsheets for a couple of the projects we were involved in:

The Palerang and District Bulletin

While I was working on my Masters of Science in Science Communication at the Australian National University (ANU) (see below) I wrote a science column and some features on local scientists for the Palerang and District Bulletin – a free paper for a rural community near Canberra.  (Note, these were published under my maiden name of Beasley)

I took this course at the Center for the Public Awareness of Science at the Australian National University between 2007 and 2008.  Through our assignments we got the opportunity to practice some real-world science communication skills, and produce real materials from them. Below is a selection of those materials. (Note, these were written under my maiden name of Beasley)

We interviewed a fellow student then created a podcast.  Mine was on the work of the CSIRO Sustainable Cities and Coasts Research Group – April 2008   [Transcript]

We took a crash course in Photoshop/Dreamweaver/Indesign and created an integrated set of products including a brochure, a poster and a few pages of a website. – June 2008 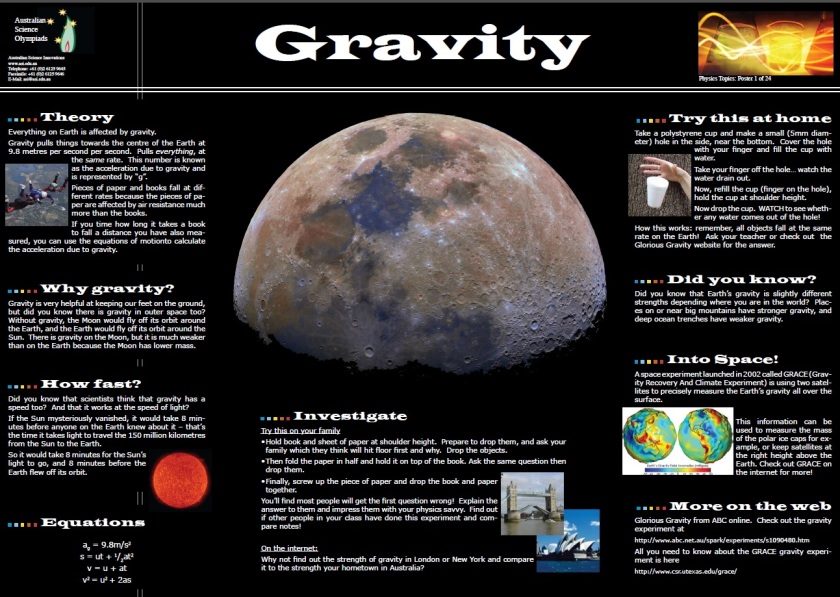 Our course on public speaking and acting techniques culminated in a 10 minute talk (without notes) to the department, illustrated with powerpoint and props, using the following imagined audience:

For your audience, assume you are talking to the general public at the Science Festival during an evening presentation.  Such an audience consists of people of all ages, none of whom have any specialist scientific knowledge of your topic.

The title of my thesis was ‘Teacher resources in kinematics: a project for the Physics Olympiads’.  For this I created two sets of resources that could be used by high school teachers to teach physics and that would also be a way of advertising the Physics Olympiads to them.  – October 2008  (If you would like a copy of my entire thesis just let me know)