There are two main landscapes on Raratonga: thick, sweaty jungle and clear warm lagoon. To take advantage of both, we arranged to do two tours on our trip: a night stand up paddleboard lagoon tour and Pa’s Cross Island Trek. Here’s how they went.

This is the third in a series of posts about the Cook Islands: read the first post here, the second post here, and the fourth post here.

Run by Ariki Adventures out of Muri, the Night Paddle (SUP) Lagoon Tour started just before sunset at 7pm. We arrived at the appointed beach and while we were waiting we noticed that all the stray dogs on the beach were barking like crazy and all racing up to one end of the beach. Someone pointed out the drone they were chasing, and we all had to scramble out of the way as the whole pack suddenly turned and raced back along the beach in pursuit.

Back at the SUP, our three guides gave us a brief lesson on how to paddle, then we were straight out into the water. Neither Jonathon or I had done this before, and it quickly became apparent that I was the slowest person in the group. This was somewhat disconcerting, especially there were people slighter than me, and someone who fell in twice in the first 5 minutes.

Each paddleboard had a light underneath, so from my vantage point way at the back, our group was a set of silhouettes against the sky, standing on multi-colored glowing patches of lagoon. We paddled over to one island for a group photo, then paddled over coral to the back of another island where we all rafted together and listened to various improbable tales like how one guide was the coconut tree climbing champion of the South Pacific, and that if you want to visit the abandoned Sheraton hotel, just tell the people there that say “Aunty said it was ok.”  We got a limited amount of information about the sea life, such as how to cook a sea cucumber, but that was all.

Given it was cloudy there wasn’t any stars to be seen and I didn’t see any fish: but I did see a turtle shape go by once. The tour was two hours long. It was a great experience to be on the water at night, and, even though we didn’t learn much, I enjoyed it. I didn’t bring a camera because I was expecting to get wet, but check their link for some photos of what it’s like.

The next morning, just before 9am we packed our water, sunscreen, mozzie spray and cameras and sat in the rather oppressive heat outside reception, waiting for our ride. One of the owners of our accommodation, Sea Change Villas, Beverly, came over and chatted for a while, then before long a battered silver van pulled up.

We got in to find a septuagenarian dreadlocked man with no shirt on, who introduced himself as “Pa”. Famed on the island as a healer, he also was the owner of Pa’s Treks, one of which we would be doing today. There were three others on board the van already.

We drove clockwise from Sea Change, looking for the rest of the group. After pulling into various hotels and resorts and not finding the right people, Pa gave up and we headed to the meeting point. Along the way he gave a running commentary on the various ills of modern medicine (e.g. people with blood group “O” should not use statins because it would kill them), and waved to everyone. He pointed out one guy on a bike and said he was the richest man on the island (“oil money”). As we passed him Pa honked and yelled, to which the guy replied good-naturedly, “F**K!”.

We passed the airport then pulled up at a shop to pick up our guide, a local guy with a big tattoo on his shoulder and a machete in his backpack. Turns out his real job is an importer of confectionery, but he does these walks as a favor to Pa. His name might have been Justin.

Pa dropped us off at the trailhead and went away. Justin said that Pa only stopped guiding the walks three years ago, after doing more than 4000 of them.

It was hot and sweaty as we made our way past a few houses with pigs and cows in pens, then Justin motioned us over to a shady patch of grass and pointed at a tall monolith in the distance – the Needle. That’s where we’re going – half way across the island – then back down the other side. It would be three miles, three hours, and 400 meters of vertical climb.

We soon reached a more shaded area, and that’s when the “cardio” section began. We climbed, up and up, grabbing onto tree roots for stability. About half way up, when we were all sweating profusely, we paused at a clearing where some roosters were pecking around, and Justin handed out big chunks of watermelon. At this point he told us that the record for the race across the island – coast to coast – was 45 minutes. He said his best time was 1 hour 6 minutes. It had just taken us 30 minutes to get from the parking lot to this point.

Then it was time to tackle the second half of the climb, which was somehow even harder than the first. Pausing occasionally for a sip of water or to take a picture, the view through the trees became more enticing as we gained elevation. 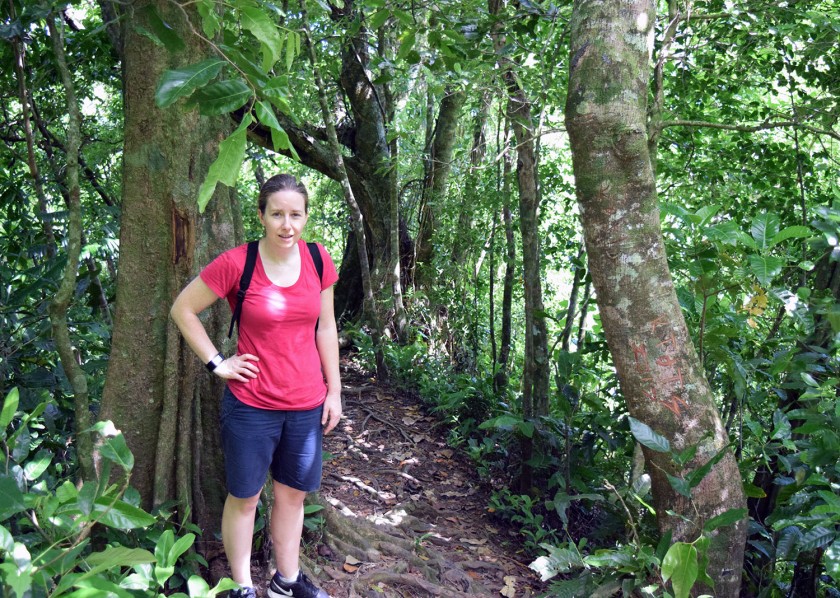 Suddenly we saw the Needle right there in front of us, and Justin pointed out the face that was formed out of the rock. He said the Needle had four faces – corresponding to the cardinal points and to different gods – ocean, land etc – and that in ancient times sacrifices, sometimes human, would be made here.

A little more of a climb was needed to get to the base of the Needle, and from this point we could see the ocean on both sides. 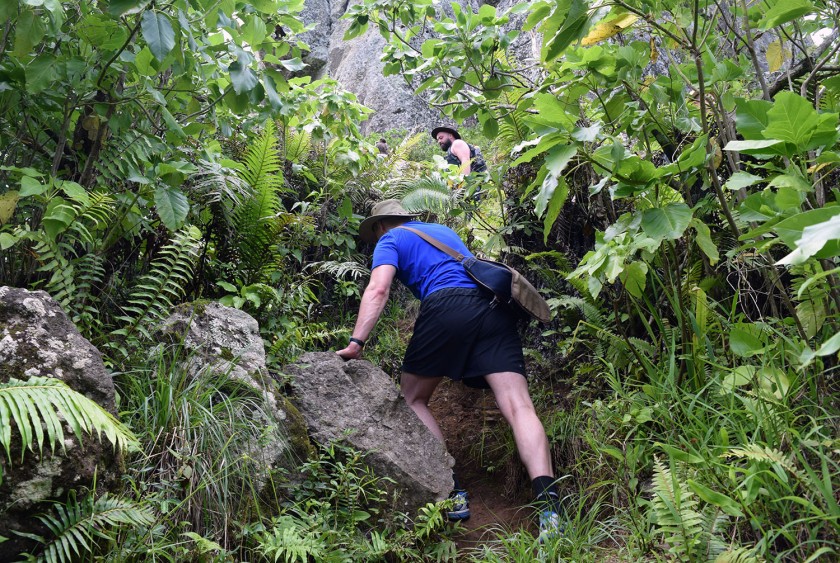 The braver of the group tackled the last little climb around the base of the Needle, but we decided to play it safe and stay put. One of our group had a little drone which he flew up and around (it was same drone guy with from Muri beach yesterday).

Then it was time to head down the other side. Justin said this was the “yoga” part of the hike, the balance part. The climb down was even more treacherous, as the clay underfoot seemed slipperier. Lots more scrambling was required, and hanging onto tree roots was essential.

At one point we came across a white pipe – Justin said contained power cables, direct from the power station to the abandoned Sheraton. It was never used. 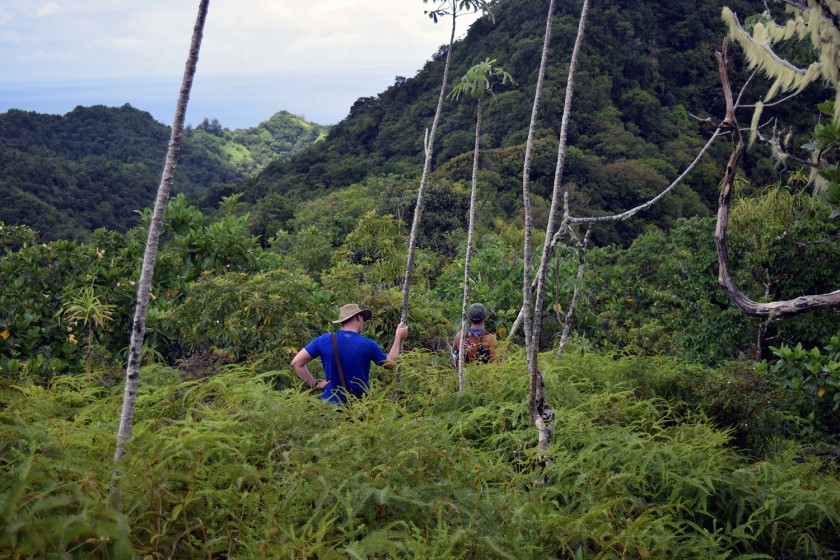 We finally slid our way nearly to the bottom of the valley, and we were told that we just had to cross the river 8 times and we’d basically be at the Wigmore waterfall, our destination. At this point it became clear that sneakers were perhaps not the right footwear. It was mossy and slippery underfoot and the rocks randomly scattered in the rivers weren’t exactly positioned for ease of use. Each part of the river was about 2 meters wide. Happily, none of us fell in, but both Jonathon and I got our feet wet.

After that it was just “10 more minutes” to the waterfall. As we approached, on mercifully flat-ish ground, except for the last bit where we had to use a rope to climb down backwards, it started to rain.

The waterfall had a lovely pool below it – deep enough for people to jump off the rocks into it. I went in up to my knees and it was very refreshing. However, this had the side effect of washing the Deet off my legs so all the mozzies in the world found me and I had to run for the van.

It really started lashing with rain as we were driven the few minutes back to Sea Change. Justin passed out magnificent sandwiches in the van, along with tasty pawpaw.

Pa’s island walk was an excellent day out and we would highly recommend it. Although I don’t mention it above, our guide did give us information about the plants and animals on the island. You need to be in reasonable shape to complete the hike because it’s pretty strenuous. It is possible to do this as a self-guided walk but the signs are infrequent. Bring plenty of water and insect repellent and be prepared to get muddy and wet!

Click here to see a short video from the Fun Travel TV company which shows an overview the walk.

Have you been to the Cook Islands? What did you think? Let me know in the comments!