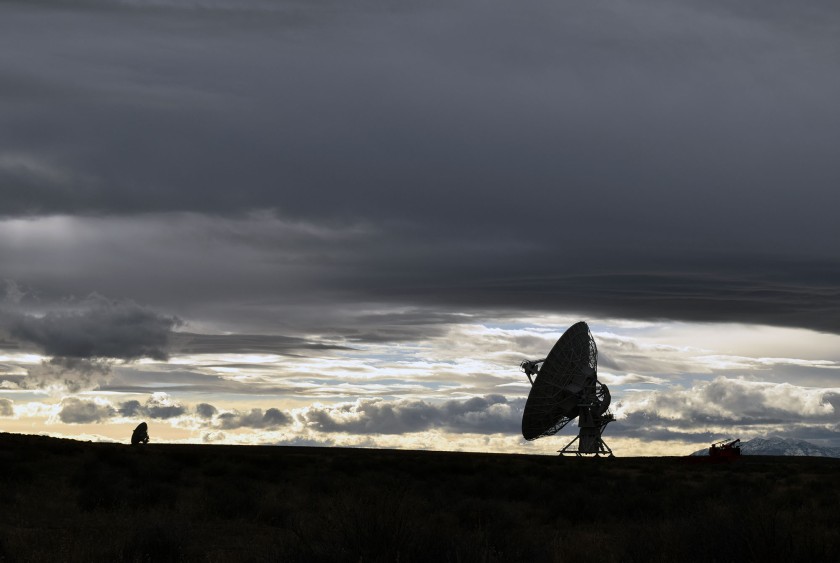 Back in January this year, my husband, Jonathon, and I traveled to Socorro, New Mexico, so that he could give a talk at the National Radio Astronomy Observatory (NRAO). This was a new state for me, so I was keen to see what it had to offer.

We flew into Albuquerque on a Thursday afternoon and picked up a car. It was already  late when we arrived so we didn’t hang about and drove south to Socorro, about an hour away.

Jonathon had been talking up the food at Socorro Springs, and it didn’t disappoint. We refueled on pizza and beer then headed to the NRAO guest house on campus via Walmart for some supplies for breakfast.

The guest house was perfect: spartan but comfortable, and very quiet.

Next morning it was cold and grey outside. I stayed in the guest house, working, while husband gave his colloquium.

In due course it was time for lunch and I met everyone at Frank & Lupe’s El Sombrero. It was serving authentic New Mexican food, and I found the menu a little opaque! To save time, someone ordered for me and I found myself eating something delicious and full of chillies.

That afternoon we were given a tour of the Very Long Baseline Array (VLBA) correlator. I know this already sounds boring, but bear with me. The VLBA is a global network of giant radio dishes which collect signals from space from telescopes around the world. The correlator is the important bit of computer kit which takes all the signals and smushes them together to make one coherent signal. Amazingly, data from telescopes all over the world are mailed here on tape drives and correlated using the computers in this building on the UNM campus. The scientific results are spectacular (e.g. “Astronomers Detect Orbital Motion in Pair of Supermassive Black Holes“).

Once we had finished in the correlator room, our host, Frank Schinzel offered to drive us down to see the Karl G. Jansky Very Large Array (VLA), about an hour east of Socorro.

So along we drove, through terrain that was desert-y but somewhat green, hilly but not mountainous, until we reached a huge plain and saw our first VLA dish (technically, antenna). Each is 25 meters in diameter and steeply curved.

Because we were with Frank we were lucky enough to get the VIP tour – the first stage of which is to get very up close and personal to one of the antennas. Periodically each of the 27 antennas goes into “the barn” for maintenance. 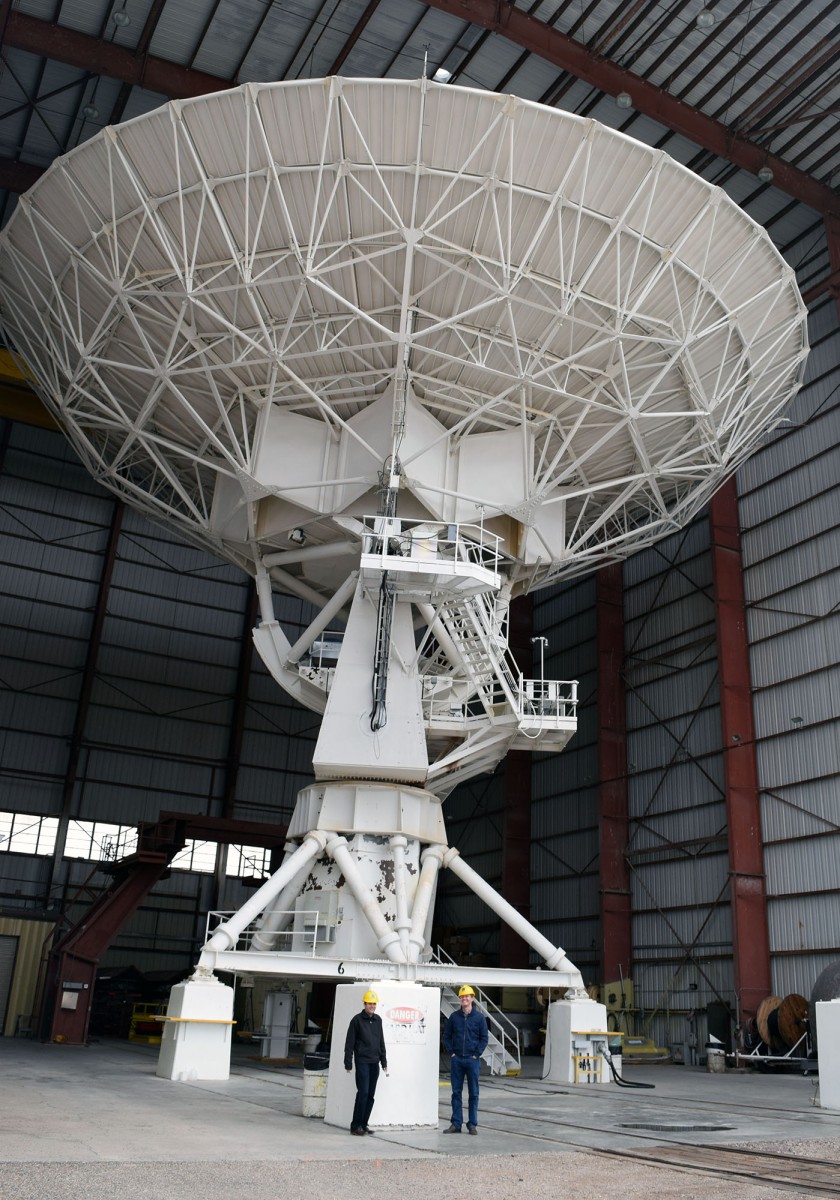 We climbed up the outer staircase and went through painted white doors, stepping over ledges and hard pieces of metal, before scaling a ladder to emerge through a hatch into the bowl of the antenna. 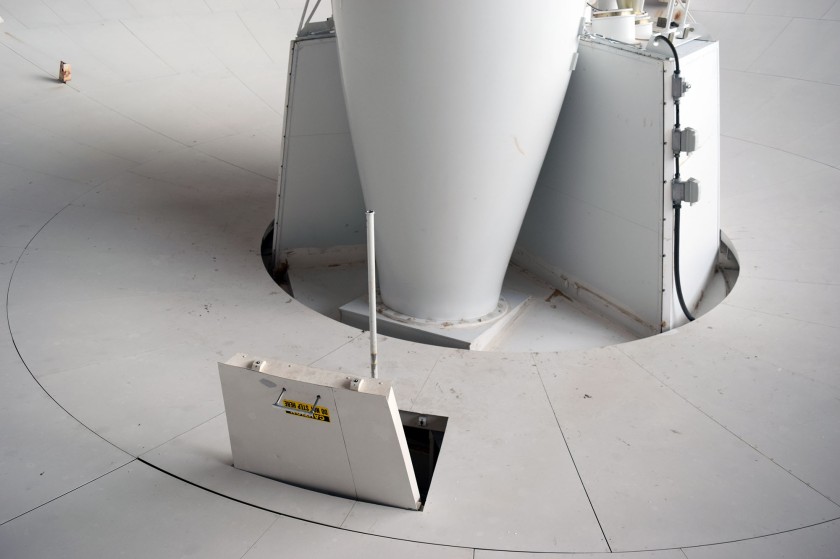 We were instructed not to step in the middle of the panels, but keep to the joints. Standing  more than a view feet up from the center of the bowl was nearly impossible and our perspectives were skewed by all the white around us. 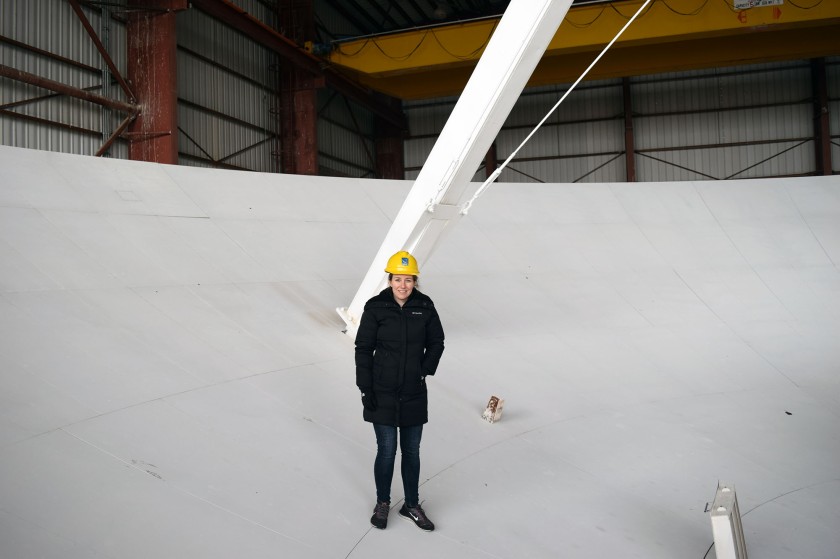 Next stop on the tour was the site of the Long Wavelength Array (LWA), a project my husband worked on while we were in Boston. It consists of a bunch of funny looking antenna in the field and a trailer full of computer bits which is the loudest place in the world. 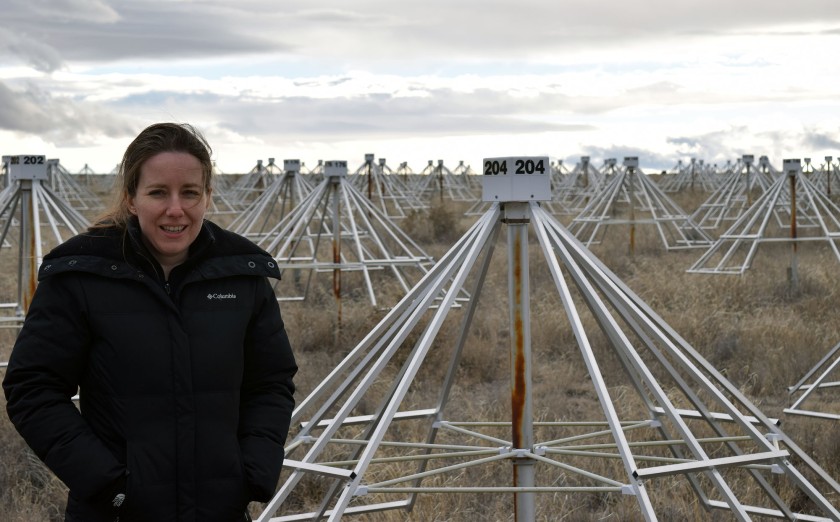 Frank stepped into the trailer to do some tinkering and we tried not to become submerged in the cold mud layer beneath our feet. The sunset was magnificent as we left the LWA for a quick stop at the small but impressive visitors center. 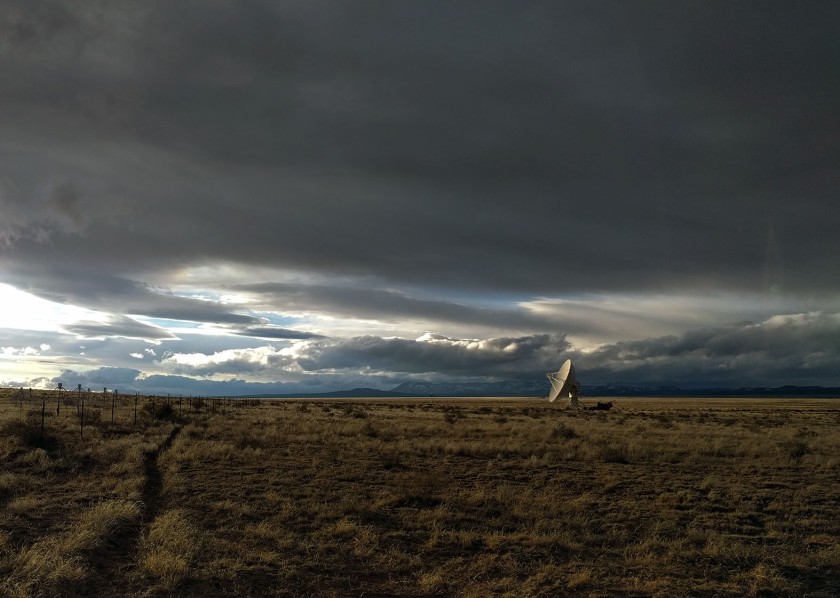 As it was already late, Frank drove us back to Socorro in time for drinks and dinner and conversations with more people from the university. We were well and truly ready for bed that evening!

The next morning we had a few hours to spare before heading to Albuquerque airport, so we decided to go for a “hike” (walk) in Sevilleta National Wildlife Refuge. This, coincidentally, holds another array that is part of the LWA.

We had a look in the excellent visitor center, complete with stuffed animal nature displays, then got a map from the guides then headed off on the hike. 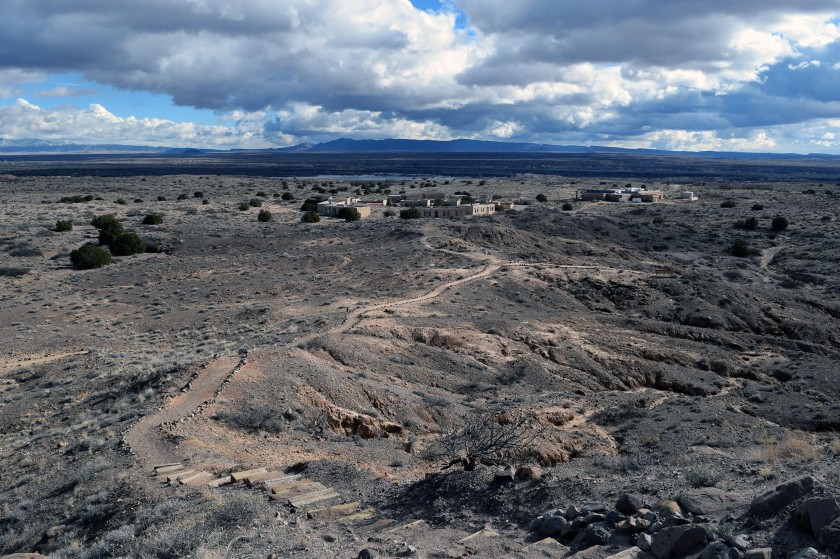 The rain in the distance was a little worrying but it didn’t approach. The fresh air and the calmness was a welcome relief. Though we didn’t see any wildlife to speak of, we appreciated the geological formations, including a fault line! 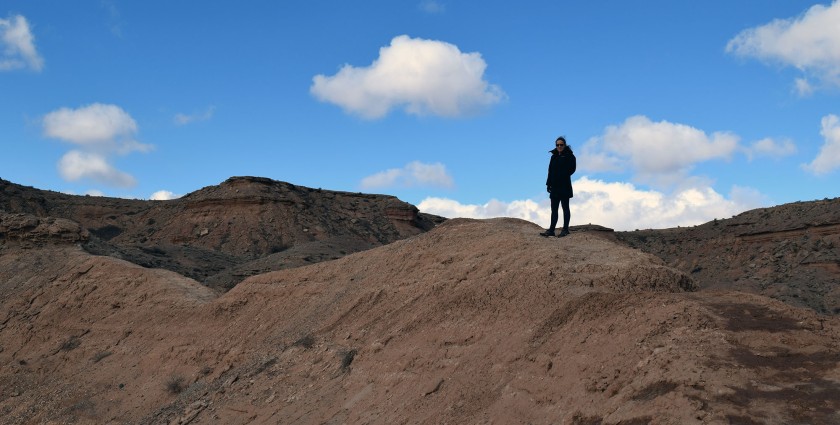 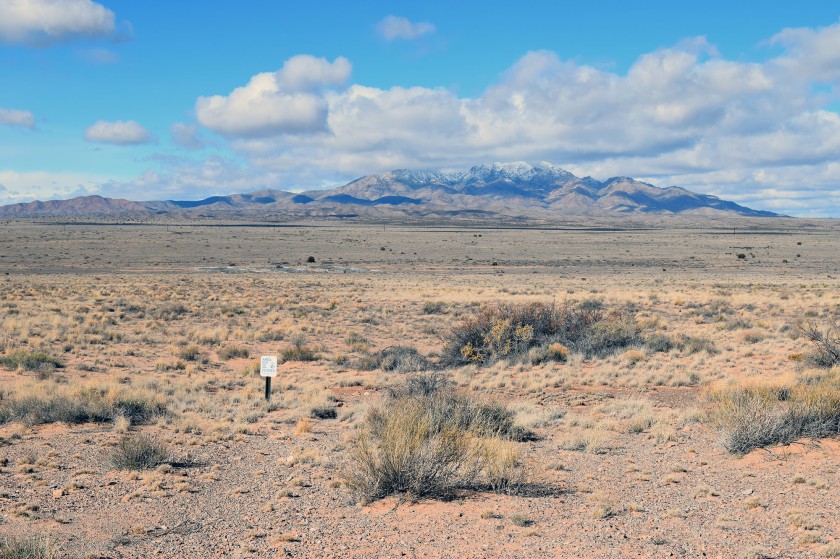 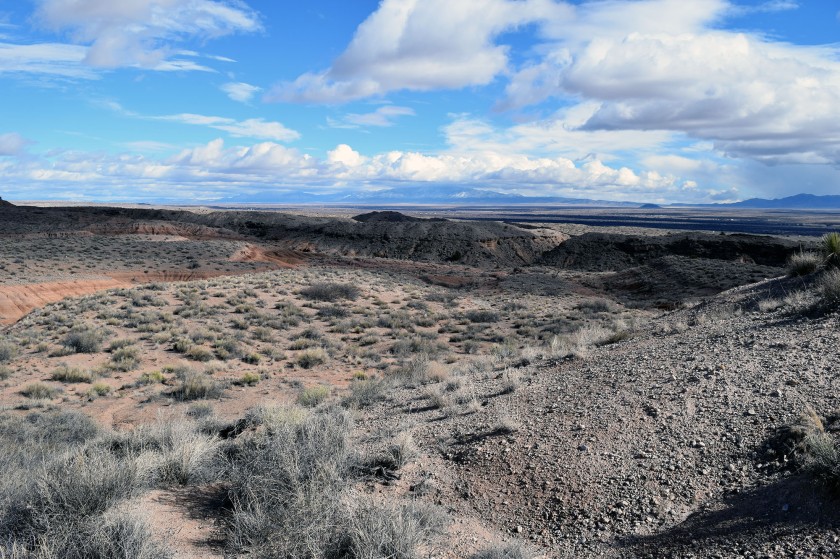 The scenery on the drive back to the airport was spectacular, with snow capped mountains and puffy clouds. 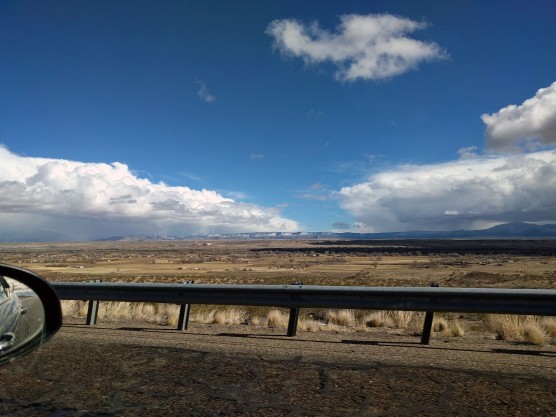 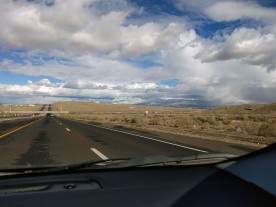 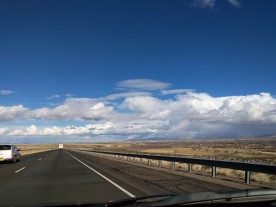 I’m happy to check off another telescope from my list! Hope we’ll be back one day.