This was our first trip to New Orleans and during the few days we had in the city we tried to visit every single place we were recommended.

We went across the river on the $2 ferry to Algiers. The variety of house decoration in this neighborhood was staggering: they were all colors of the rainbow, all were festooned with plants and flowers, and many had intricate woodwork. It was only after we got back we learned that Algiers has a very high crime rate.

We went up to the City Park on the tram with wooden seats and windows you could lean your whole torso out of if you chose. At the gardens, Spanish moss coated all the trees and homeless people were camped in the bushes.

We took the tram to the Garden District and used a self-guided walking tour I found on the internet to explore the area. The tour was quite interesting but one got the impression most of the information was made up. The cemetery and the architecture in this area were fascinating. We saw beads in the trees. 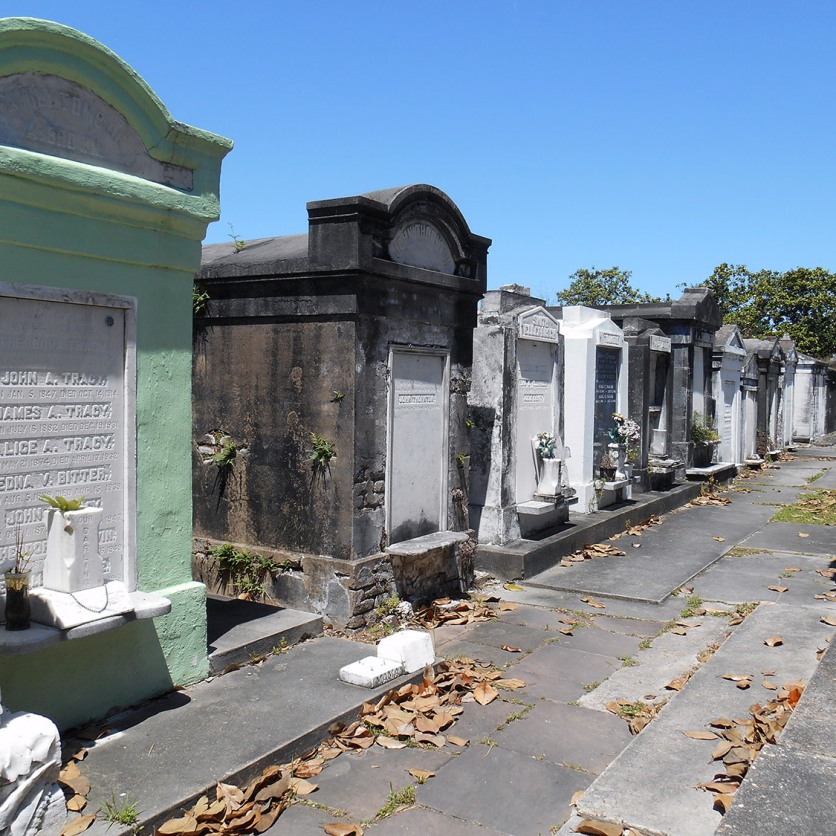 We also went to the French Market for the random stalls and walked along Frenchmen Street one evening to hear loud jazz overlapping from multiple venues.

As a closet geography geek I was interested to see the city’s flood defenses up close. We found out how to get to the walkways on top of the levees (i.e. scramble up them) and saw the city and the Mississippi river from a different perspective. From here we saw houses and industry to our left, and to our right, the river and giant tanker ships. The river seemed like the focus of the city, yet somehow peripheral to it.

Walking the streets of the French Quarter (Vieux Carré) in the relatively early morning was a contrast to the loud and crowded night-time experience. In daylight we were greeted by delivery trucks jamming the road. Men with hand carts were pushing boxes of vegetables to their destinations, and the ground was wet from owners hosing down the sidewalk from the previous night’s excess.

The freight trains are a feature of downtown New Orleans too. We heard the horn every evening, but thought it was a ship. Then as we were heading to the Hilton’s Dragos for charbroiled oysters, and we saw a massive train trundle past.

Next post: What to do near New Orleans. We took a car to visit a plantation and a swamp.