Winter has kind of arrived in Pasadena.  Not that it’s exactly that cold: it was 25C (77F) yesterday. There have been some changes in our garden since my last garden post in September, and this long weekend seems like the perfect time for an update.

Thanks to Dad, we now have beds in our yard!  After much head-scratching and grovelling around in the dirt with the tape measure we decided on two octogons, 4ft on each side.  We had to plan around the sprinkler system and the lemon tree which I planted a few months before. We got pressure treated planks from from Ganahl Lumber.

Dad pick-axed out the necessary 64 ft of rock-hard dirt to bed the planks in about 5 inches (of 10 in total).  We nailed them together (I may or may not have also hammered my finger) the watered the dirt to help it set.

And here’s the after:

Dad went back to the UK, needing another vacation.

I then did a calculation and ordered 2.5 cubic yards of soil (not topsoil, but planting mix) from the Lincoln Avenue Nursery which duly arrived on the back of a tipper truck and was dumped in our driveway.  I had to then move this 2.5 tonnes (?) of soil the 10-20 ft to the beds. One. Shovel. At. A. Time. (And yes, I should’ve just bought a wheelbarrow, but where’s the fun in that?)

Some considerable number of days later, this was the result:

But, then we went to Australia, then I got a job as a driver helper, then it was Christmas and I couldn’t really walk because of the aforementioned job, then I started another new job, and now somehow it’s mid-January and not much planting has occurred.  Weak, I know.

Meanwhile, here are some other things going on in the garden at the moment:

(1) Flowers on the Jade plant. I never even knew these flowered! 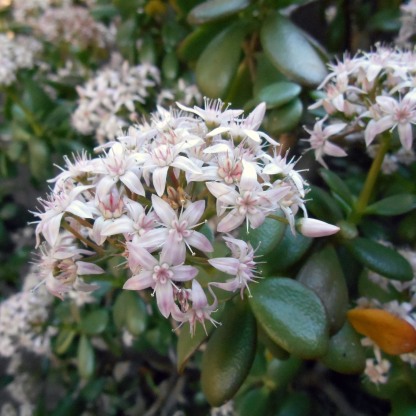 (2) The plant I thought was a wisteria turns out to be a powderpuff and has also flowered. These were my second favorite flowers as a kid in Australia (after the Frangipani, which I think is called something else in the US). 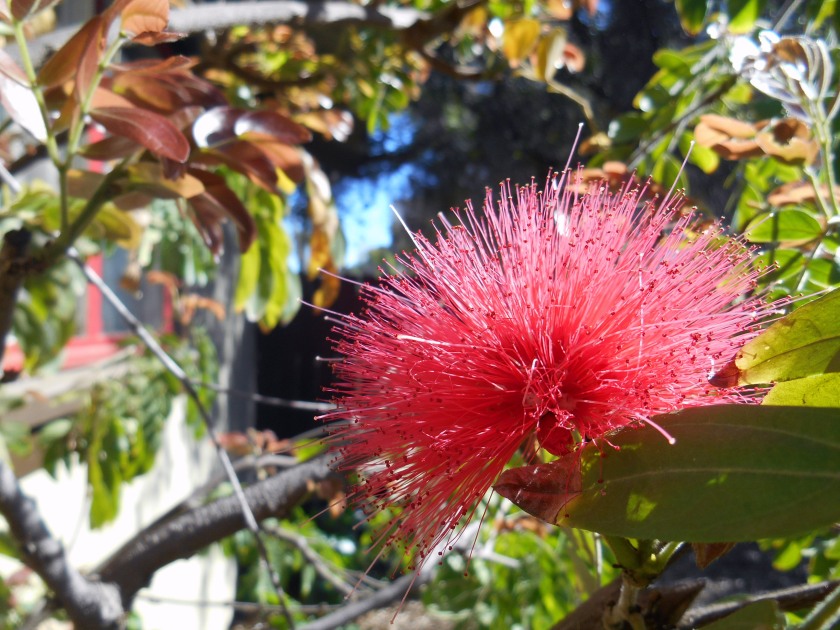 (3) Several of these massive green things have appeared and are getting bigger by the day. Scary. 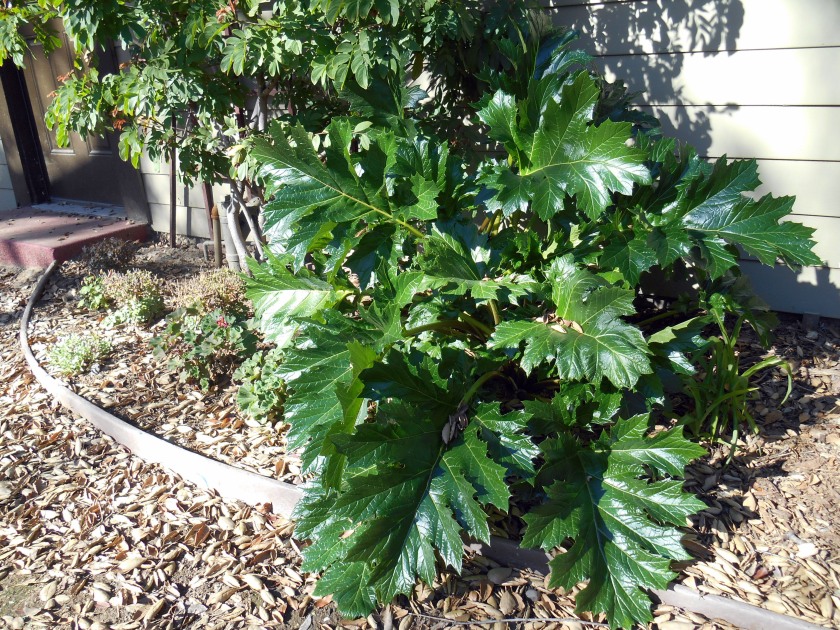 (4) We got a bird bath thanks to my grandmother. I’ve even seen birds in it!  The other day I found the top on the ground – I think a cat or something tried to get in it.

(5) We acquired a couple of lovely big pots which I’ve put filled with some easy-do flowers and herbs and a gardenia.

(6) From the same source we also acquired a very spiky plant which came complete with corks covering the spikes.  It’s awesome but I’m not entirely sure what do with it, so I’m leaving it in it’s crumbly pot at the moment… 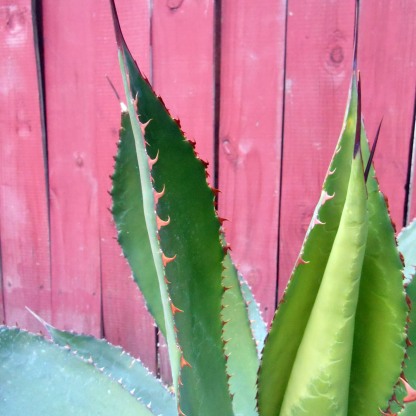 (7) I got a compost bin from the city.  It’s full but I haven’t dared check if we actually have compost yet.

(8) Ok, this isn’t new, but the lemon tree is still hanging in there.

We’ve had a lot of rain (relatively speaking) in the past month or so and the garden has transformed because of it.  I saw a couple of worms (I know, this shouldn’t be news but I was very excited) and we got a lot of weeds and seeds poking up.  Also, thanks to the Chinese Elms and the Oak, the garden is coated in leaves. 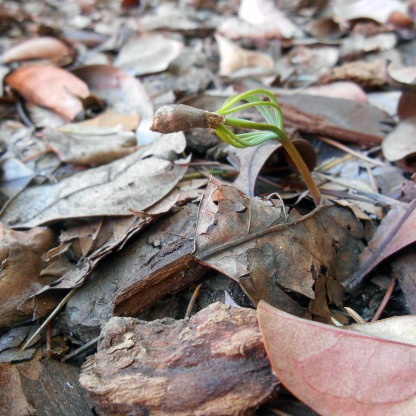 So the plan is to get the garden beds planted as soon as possible: pretty soon I’m going to plant some vegetable seeds in one of the beds and in the other I’m going to try to recreate some ideas my father-in-law’s Australian garden. Wish me luck! 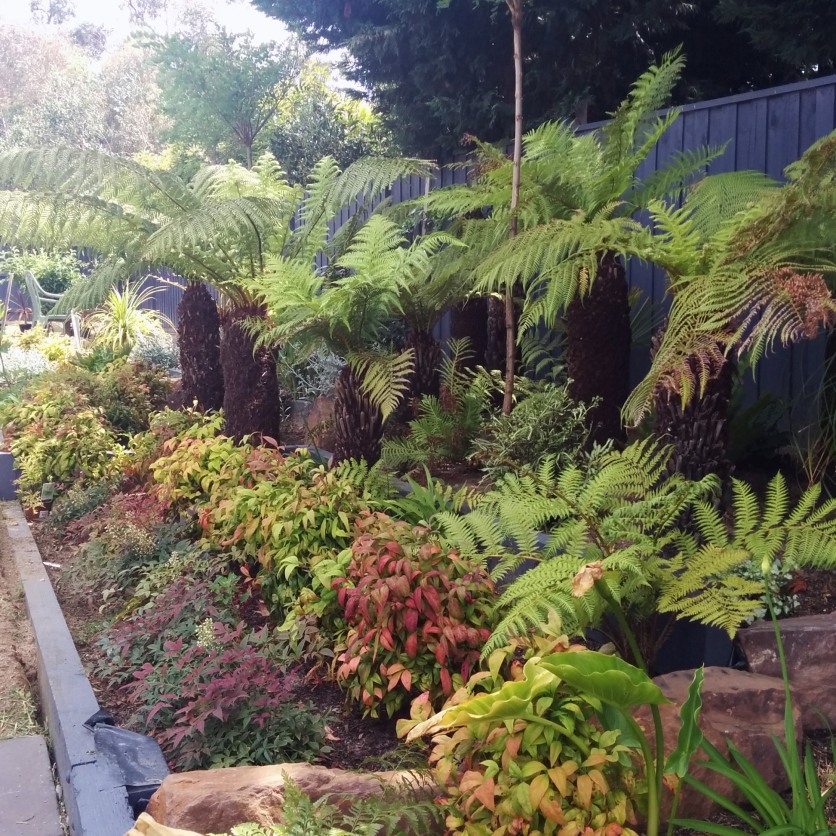 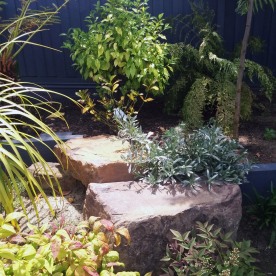 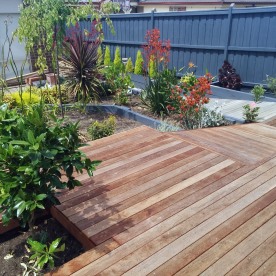 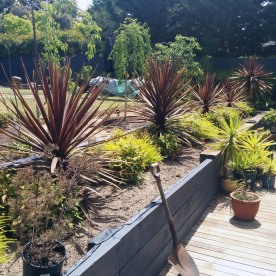 Question: any tips for planting in a garden that doesn’t really get a winter?