Last week we were treated to a fabulous evening at Mt Wilson Observatory.  Michael Long invited us to join a group of JPL interns and LACC students on an observing session on the famous 60-inch telescope.

We left Pasadena at 5.35pm and we met Mike and the others at the gate in plenty of time before the 6.30pm kick-off.

Once everyone had arrived we drove in convoy through the gates.  It was only a short drive along narrow one-way roads before we arrived outside the domes.

The evening formally began with a tour of the ‘most famous telescope in history’ – the 100-inch.  This frankly massive telescope was used by Hubble to discover that the universe is expanding, and that there are many different types and shapes of galaxies outside of our own.  Let’s not forget these discoveries were made in an era where it was commonly believed the Milky Way was the entire universe. 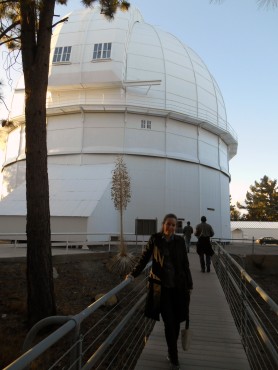 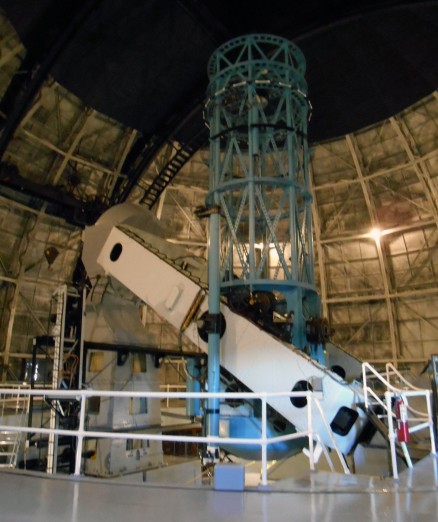 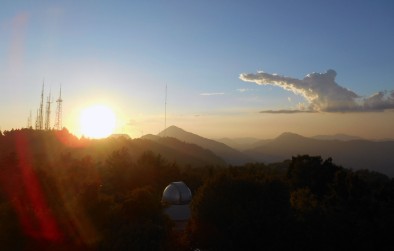 We all spent far too long on the catwalk taking photos and admiring the sunset and soon it was time to head over to the 60-inch.

Mike warned us as we were walking not to wander off too far in the dark.  Hazards include mountain lions, rattlesnakes, and bears, as well as steep drop-offs. 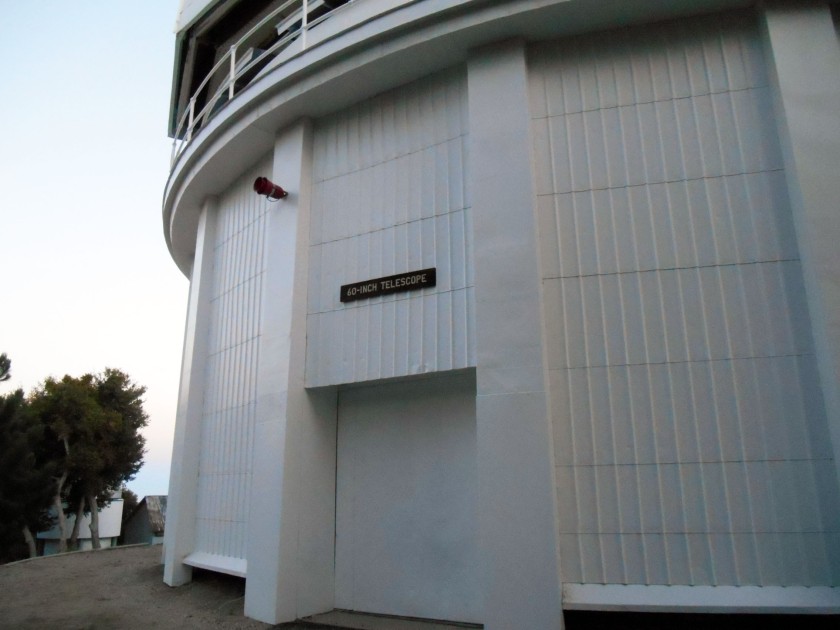 The program observer for the night was Nick, a very knowledgeable man who told us he’d been doing these tours for over a decade.  When we arrived on the observing platform he already had Mars lined up.  We were given another safety briefing, warning us about the 150V DC lines running around the edge of the dome (protected of course) and the truck wheels that move the dome.  Interacting with either of these would not be a good plan.  We were advised to stay in front of the semicircle of chairs and all would be well.  Keeping out of the way of the telescope when it was being slewed was also a requirement, since ‘the telescope won’t even care as it knocks you over’.

Nick showed us how to look through the telescope. The eyepiece was on the Cassegrain focus, and we would often need to use a big stepladder to get to it.  We were free to step on any blue-colored part of the telescope, and to focus the eyepiece to suit ourselves.  We were asked not to press any of the inviting red backlit buttons near the eyepiece though.

So, to Mars! We lined up and took turns to climb the ladder to the eyepiece.  Mars was a smallish fuzzy red blob and I imagined I could see a faintly darker section of the disk.  I also imagined that it wasn’t a completely round.  Checking this website later and it looks like I was right – it did have a slight phase on it! 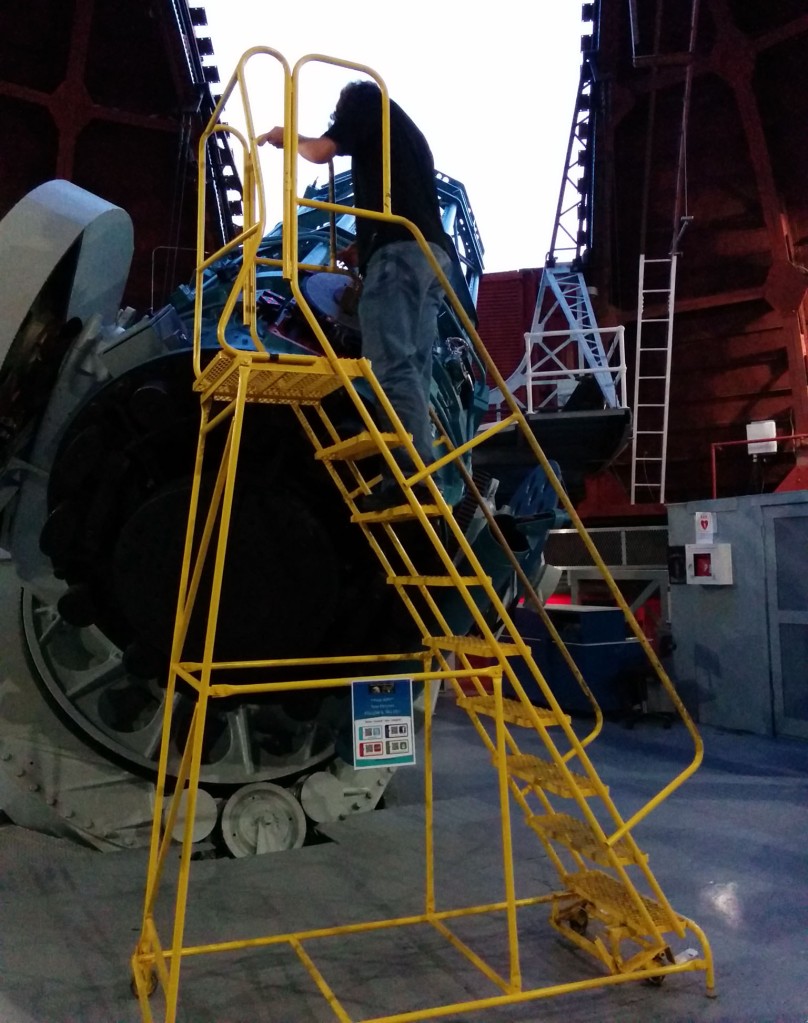 Then, as Mars began to set, Nick quickly shifted the telescope to Saturn. This was easily the most spectacular object of the whole night (when isn’t it?). Everyone uttered ‘oohs’ and ‘aahs’ as they saw it.  It was yellow and featureless, and we could see the amazing rings.  Viewing with slightly averted vision revealed the Cassini division in the rings.   I could also clearly see four of the moons. I tried to take a photo with my phone but it was quite hard to line up the camera with the pupil!

At this point the temperature in the dome started to drop noticeably and complimentary hot chocolate was very tempting. The skies darkened as people went back for a second look at Saturn.  This was nearly the last picture of the night for me as my camera battery died and my phone wasn’t up to the job.

The next object we saw was M13, a globular cluster.  It seemed small compared to the more familiar-to-me southern hemisphere Omega Cen, but individual stars were clearly visible.  Then, the Cat’s Eye nebula was lined up by Nick.  This is a planetary nebula – a dying star surrounded by shells of it’s own blown-off gas.  Spectacular.

We saw Epsilon Lyrae next, known as the ‘double double’.  Four stars in total, two sets of two.  It seemed that the two stars that made up each binary were equally separated. Very nice indeed.

As Nick moved the telescope in an orderly way across the sky our next object was M57 – the Ring Nebula.  This is a similar object to the Cats Eye nebula but much fuzzier. There was no obvious central star.

Alberio, another double star swiftly followed. This pair of stars is a wider binary than each of those of the double-double.  One was clearly white, and the other clearly yellow.

The last object for us of the night was Campbell’s hydrogen star – a Wolf Rayet star.  This was another fuzzy one, but very small, even with the magnification boosted from 300x to 500x.  We could just make out a faint red tinge to the glow.

And then it was time for us to leave – it was only 11pm but one of us had work the next day!  The JPLers and LACCers had the telescope until 1am and I’m sure they saw many more fabulous objects.

I would highly recommend an observing night at Mt Wilson.  While the price may seem steep, once it’s divided by 10-15 people, it’s excellent value for money.  Not only do you get to look through a telescope that was once the largest in the world, and was used to make unprecedented discoveries about the universe, you get a spectacular view of Los Angeles on the drive back down the mountain!