On our recent trip down-under I tried to run every other day, but I only ever really had time for short runs, usually about 30 minutes.  This is what happened when I attempted my first long run in over a month.

In late November we were visiting Canberra, escaping from the Boston winter and visiting my husband’s family. It was Saturday morning and I wanted to go for a 6 mile run/walk, about an hour. I wasn’t that familiar with the area where we were staying, and we had no internet and our phones had no data, so I had to resort to a physical map.  I looked up a route that looked about right and I memorized it as best I could – there weren’t many roads so I figured I wouldn’t get too lost.

I set out at 9.30am and it was cloudy and not too hot.  Garmin tells me it was 60F/15C and 70% humidity – very un-Canberra weather. I started with a lap around the local lake then headed down to the Murrumbidgee River.

The path to the river was obviously an abandoned road but it wasn’t long until I intersected with a sparsely populated car park and a sign showing the nearby walking tracks.  I checked and double checked I was heading on the “cycle path” running along the east of the river and set out. It turned out it was a actually narrow mountain bike track rather than the smooth tarmac I was expecting. The trail was somehow both sandy and rocky and once on it I was out of sight of all civilization.  Running on a trail was a new experience for me and it quite slow going as a tried to avoid rolling my ankles. It was only when I heard rustling at ground level, and  remembered about Australian snakes, did it occur to me how remote I felt.

I was just under halfway through my run when I got to the end of the trail and heard yet another rustle, followed by a black shape disappearing under a bush.  This convinced me not to retrace my steps home, and instead to push on with my original route.  I ran through another deserted car park, up to a road which I assumed would lead me out to the main road.  On the map it had looked like a matter of yards, but it was only after another mile that I started to see buildings.

Based on my earlier map reconnaissance I was expecting a no-brainer route home. Unfortunately Canberra has changed a lot since that map was printed.  And also unfortunately I had neglected to memorize the names of the roads I was looking for… So I found myself on a road with a sign to Athllon Drive.  Having previously lived in Canberra for four and a half years I knew that was somewhere in the region of where I needed to be but I didn’t recognize anything so I turned away from the sun and followed the road.

This being Canberra on a Saturday morning, however, there was no-one around to ask exactly where I was.  I was starting to flag, I was getting hotter but I knew I was at least 4 miles away from home back the way I had come, so it was just a question of whether it was faster (and less snake-infested) to just keep going.

I decided to keep going and I eventually hit a roundabout and saw a sign to Drakeford Drive. I was pretty sure that was even better than Athllon Drive so I turned onto it.  I still didn’t recognize anything from my 6 mile/hr perspective though. (On a later drive back this way it all was perfectly clear).

My feet were hurting and the grey clouds were weighing down on me. I kept going, run 3, walk 1, slowly reeling in long stretches of tarmac, until eventually saw the hill behind the suburb of Calwell in the distance.  I’d climbed that hill one summer with my husband so now I finally knew where I was. A mile after the first roundabout, I arrived at another with the big sign I was hoping for: Gordon.  I figured I was home and dry.

Sadly, because of the unique way Canberra is designed, even though I had reached the outskirts of Gordon, I still had two miles to go before I got home. I had no idea about this at the time, though; all I knew was that I still wasn’t home yet. I took an extra long walk break, then decided it was getting ridiculous.  So I picked up the run, and staggered home 15 minutes late, having done a mile more than I had planned. 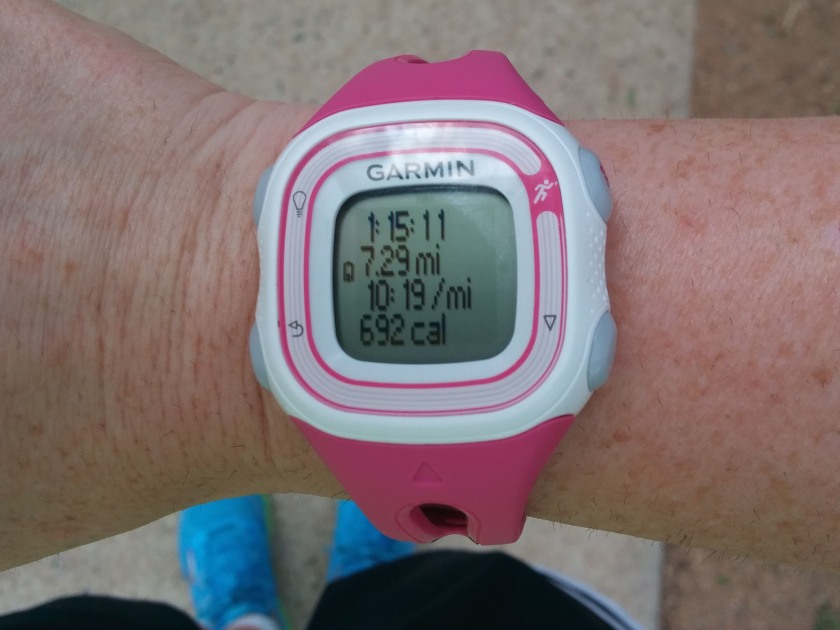